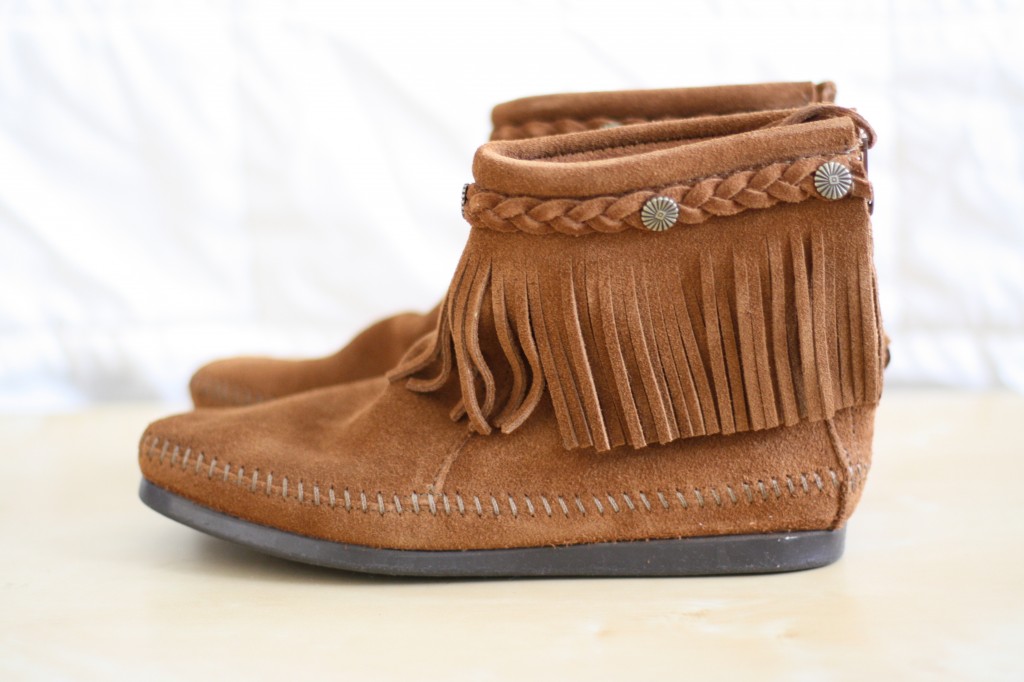 After missing the mark on my April favourites due to limited ambition and health, I’m back in the saddle this month! Lots going on, and lots to look forward to in June as well. Here you have it:

Since I’ve still been feeling queasy, particularly first thing in the morning, breakfast has been a bit of a mundane ordeal. A couple slices of sourdough, Mayvers natural peanut butter, and some kind of fruit has literally been my go-to 6 out of 7 days of the week.  Basic, carby, not too heavy…everything my growing belly desires at 7am. 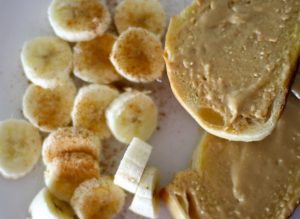 First of all, can I just say that I miss sushi more than anything right now? I’d give my left arm for a spicy tuna roll and an order of salmon sashimi. Some friends of mine who are also pregnant have actually been eating sushi. Even though I’m sure it would be fine, I am still wary!

I have not had anything earth shattering for dinner this month. I’ve been trying to plan all of our meals in advance to keep me from eating cereal or toast. The one reoccurring side dish has been sweet potato “fries”. They’re healthy enough yet feel like a fun, comfort food at the same time. I cut up a sweet potato into wedges, toss them in some olive oil, a little Himalayan rock salt, and ground pepper, and bake for about 25-30 minutes. I don’t follow a recipe, but if I did, it would look similar to this one (minus the extra salt at the end). 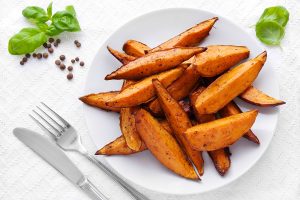 Hard boiled eggs have been on my snack-o-meter a lot this month.  I’ve also really liked a small bowl of stove top oats with organic frozen blueberries, some nuts, and a touch of brown sugar. I’ll have this about an hour or so before I go to the gym in the late afternoon, and I’ve found it really gives me a great energy surge. 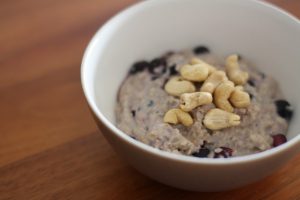 I decided it was in my best interest to back off the Body Attack instructing for the rest of this pregnancy. For anyone who has done a class before, you know that some of the tracks (particular #4 and #9) can be pretty intense. Unfortunately, I was offered a permanent teaching position for an evening class at my gym, but I just don’t feel comfortable coming into the group as the new instructor and immediately having to modify my moves while the rest of the participants do their big plyometric movements; no tuck jumps for this girl any time soon! I have still been participating in at least one Attack class each week to stay attuned to the program, and have been rounding out my weekly workouts with two Body Pump classes and a couple of moderate cardio machine workouts. Exercise has been one of the few things that’s actually made me feel better through everything so far.

Water water water. Trying my best to stay hydrated. Although, I’ve come to find that decaf skinny cappuccinos are a wonderful treat. 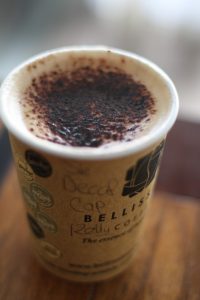 The Bubs (aka Thomas) has been sick with a cold over the past week or two, which hasn’t been overly joyous for anyone. We’ve had a few too many middle of the night wake-up calls, but I suppose it is all part of this parenting deal. Otherwise, he’s beginning to say several words, which is exciting! He can point out numbers, animals, colours, shapes, and familiar objects and follow directions (eg: “Where is the cat?” or “Go get your green ball!”). The dramatic increase in communication has been pretty entertaining, and makes my days much more interesting and full. 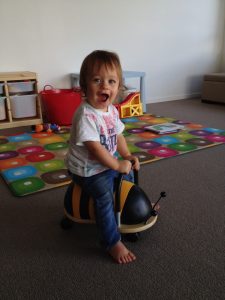 Baby #2, who is currently nicknameless, has taken my body for a roller coaster ride over the past four months. I am clearly showing and my pants are getting pretty tight. I think I have a week or two until they no longer fasten. It’s funny how your body reacts to a second child. With Thomas, I barely looked pregnant until about 23 weeks. I’m currently 17 weeks, and there is no mistaking that there is a turnip sized bub in there! I’m also gaining more weight this time around. Why hello there, love handles! Ahh well, what can you do? I’ve been here before and know it’s totally worth it; there will be plenty of time to get back into game shape in 2015. 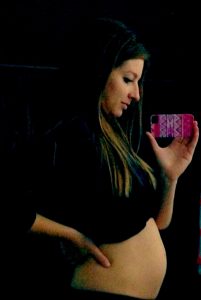 Oh, and I realized I never did post the “Monthly Photo Shoot” I did for little T during his first year. I took the photos for a photo album I’m making and kept track of his monthly milestones and accomplishments. Just a little keepsake I thought I would share. PS- these photos from 6 months onwards were a workout, let me tell you. I’ll have to figure out an easier method for documenting little #2. 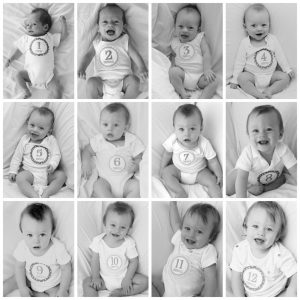 I’ve been eyeing Minnetonkas for years, of all varieties. I finally settled on these high top fringe boots, which are super comfortable and will come in handy over the cooler Aussie months! 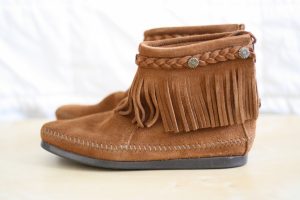 My Moccasin Inspiration: Elle Ferguson of They All Hate Us. Always love her style! 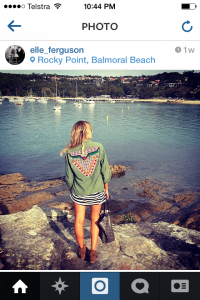 Blog of the Month

Sydney-based blogger Kristy is the writer of Southen In-Law. She was one of the first bloggers I “met” after moving to Australia, and she’s been so supportive of my little webspace despite having tons of blogging success of her own. Even though I do not have celiac disease or even a gluten sensitivity for that matter (she is celiac so her cooking caters to it), her recipes are all fabulous and my “to make” list just keeps on growing. Anything I have recreated has been delicious, healthy, quick and uncomplicated…everything I could ask for. On this weekend’s baking schedule: fudgy avocado brownies! 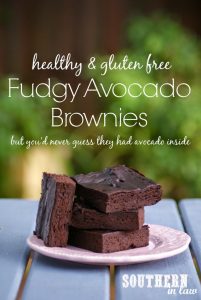 Got myself a new tub of Ro’s Argan Body Conditioner from Lush a few weeks ago. It smells amazing and is super softening, which is perfect for the dry skin winter months in Australia…or any time of year, for that matter! 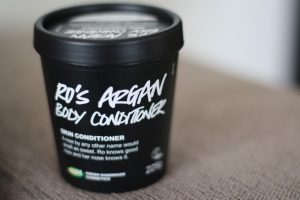 Been loving German band Milky Chance. It all started with their single, “Stolen Dance” which I hear on the radio daily, but I’ve found I also like a ton of their other stuff as well. Stolen Dance was actually released a year ago, but just making its way to the Australian charts as of late. I have no idea whether its old news in North America or not. Either way, I’ve enjoyed this musical find and wish I’d known about it sooner.

Naps. I’ve been the queen of napping over the past couple months. Although, I don’t necessarily feel too guilty about it. I’m unsure if I could have made it through some days without one.

I need to bite the bullet and invest in a couple of maternity items. I lived in dresses when I was pregnant with Thomas, but it was a completely different situations as 1) I didn’t have to roll around on the floor/park/play groups and 2) my 3rd trimester was amidst the dead of Australian summer. Things are different this time around, as we have cooler months ahead in Australia, as well as a trip overseas for 5-6 weeks. A few more clothing items are required to carry my belly and I through to the next round.

What I’m Proud of this Month

Being absolutely repulsed by vegetables, yet forcing myself to eat them anyway. Seriously. It was quite the accomplishment.

Areas for Improvement this Month

Cut back a bit on the indulgent snack foods and up my produce intake, particularly now that I’m starting to feel better. 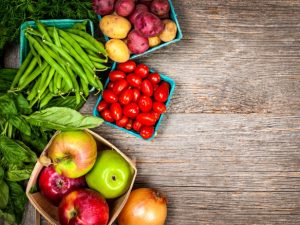 Things I am Looking Forward To (in the next 30 days)

Things are looking up! I am thoroughly anticipating everything that’s headed my way in June! Ready for it?

Anything you loved/discovered/enjoyed in May?

What are YOU looking forward to in June?